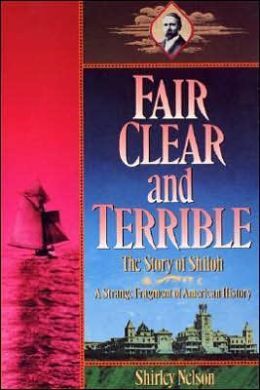 Fair, Clear and Terrible: The Story of Shiloh, Maine

Soon after my first novel was published, an editor gave me a piece of urgent advice. “Write another novel, now, quickly.” He meant while I was on a bit of a roll—hang on by my fingernails to the slender edge of recognition the first book had gained.

But I wasn’t at all sure I had another novel to write, and I already knew what the second book must be. In fact, I had begun to write it years before, as a novel actually, and had abandoned that approach when I saw how distinctly it claimed its right as history. At the same time there was no way I could palm myself off as a historian, and so what finally emerged is what I could comfortably call a “narrative history.”

The story of Shiloh belongs to my parents and many relatives and friends, the heritage, like it or not, of successive generations. The word “terrible” in the title means “frightening,” or “awesome,” as indicated in the bit of Scripture that inspired it: “Fair as the moon, clear as the sun, and terrible as an army with banners,” borrowed as self-description by Shiloh, an authoritarian community in southern Maine in the early decades of the last century. At its height, the movement could claim over a thousand members.

My parents were brought there as children by their own parents. Both of them grew up in the organization and defected, separately, as young adults during World War I. My father had been writing his own memoir as long as I could remember, and well before I turned to what became my first book, he and I were doing research and interviews together for what I thought would be his. That record, titled The Almighty and Us, was finally self-published in 1979, just months before my father died.

I worked on my version for another ten years. My father had been more concerned with the injustices he and others experienced there. I found it to be an exciting story of human aspiration—court trials that got national attention, a lost-at-sea saga of frightening proportions. Four historians I deeply respect looked over my shoulder through successive drafts: William McLoughlin, Mark Noll, Grant Wacker and George Marsden. British American Publishing brought it to print in 1989, under the guidance of editors Sue Dumbleton and Margaret Black. It won the first Follot Award for Literary Content (from the National Association of Independent Publishers) in 1990. It is now in a paperback edition, printed on demand at Wipf and Stock in Oregon.

Those interested in primary materials can find them at Bates College in Lewiston, Maine, at the Edmund S. Muskie Archives and Special Collections Library, in a collection that bears my name. Tell them I sent you.


EXCERPTS FROM REVIEWS AND COMMENTARY

A remarkable piece of historical documentary, written with the flare of a first class novelist.

—William G. McLoughlin, author of Revivals, Awakenings, and Reform.
A riveting story...very much out of the way, as compelling a narrative as it is instructive in faith.
—Mark Noll, author of Decisive Moments: Turning Points in the History of Christianity.
A wonderful job of historical research.
—George Marsden, author of Fundamentalism and American Culture.
The prose sparkles, the authorial voice is always fair and trustworthy, and the huge cast of characters is always strongly controlled.
—Jeffrey Berman, author of The Talking Cure: Literary Representations of Psychoanalysis
The author’s only previous effort is a novel, which gave this reviewer great reservations about her ability to conduct a serious, scholarly historical study. It came as a pleasant surprise to find the book as well researched as it was written. ...The author excels in her ability to open up the ordinary lives of the people involved in this religious experiment.
—Stuart A.Wright, in Church and State. Author of Storming Zion: Exploring State Raids on Religious Communities.
...The strange building, the wild man, the ships, the woman under the tree waiting for an apple to fall, snow down a long lane....
—Eugene Garber, author of Metaphysical Tales.